An oldschool-style, lightweight TTRPG for one adjudicating player and several character players. What if Shadowrun, but instead of Gibson × Tolkien it was Gibson × Cthulu Mythos?

The Matrix: a global telecoms infrastructure; a worldwide computer network; a VR psychogeography. It's a workplace, a marketplace, a playground.

R'lyeh: a city; a non-Euclidean megastructure; the Travelodge where Ragnarok naps. It's a myth, a nightmare, an above-top-secret black ops archaeological dig.

You honed your skills on intercorporate warfare, industrial espionage, and deniable paragovernmental ops, but you've graduated to a new game. Now they drop you into the Pacific depths in a submersible, to infiltrate an impossible complex, hack the dreams of apocalyptic gods, and steal their secrets.

The payoffs were big when you were just cracking banks and crashing corps; the risks were high when all you were crossing were mafias and governments. They call you Runners: partly because you're running smuggled data, mostly because knowing when to bug out is the only thing keeping your hide, your mind, and your soul intact.

(Credit for the splatter background goes to Aaron King — available from http://erinking.itch.io/splatter-backgrounds!)

Alongside the original, you can now download Arcanohackers 2.0! The rules are largely the same, but they've been factored out into a semi-independent rules document; Arcanohackers itself is now presented as a campaign framework for it. In addition, an expanded version of Unaussprechlichen Spiele is presented as another, fully compatible, campaign framework within the same setting; plus a first pass at a monster book, the Threat Recognition Guide.

Support this game at or above a special price point to receive something exclusive.

We can have nice things. Want one? Can't justify the money? Go for it! 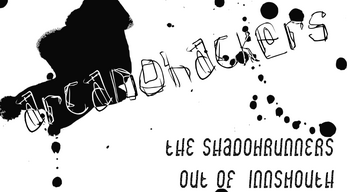