You are one of a handful of overworked, alienated, vital people, one foot in the Here, one planted in the Else. They might call you and your peers a coven, were you somewhere more cosmopolitan. As it is, you are who you are, and whatever comes, you will have to be sufficient: une galére des sorcières.

(As featured in a Halloween charity fundraising one-shot Twitch stream by Friends Who Roll Dice!)

Support this TTRPG at or above a special price point to receive something exclusive.

We can have nice things. Want one? Can't justify the money? Go for it!

An amazing game for witches out in the middle of nowhere, where to be a witch is to be an overworked "doer of the grimly necessary." Opening by describing the GM-player relationship instead as "an asymmetrical, cooperative game" gives it a slightly different tone that I think is followed through on well with the option to voluntarily fail an action.

With a light hand, it paints a stark world I'm excited to explore. There are a few touches that remind me of the Discworld witches, but the game does not share that setting.

(included in the "Indie bundle for Palestinian aid") 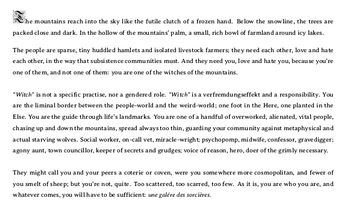